I'm a British songwriter/ex-recording artist living in the U.S.. In the past 20 years I've had songs recorded in the States by the likes of Cher, Heart, Peter Cetera with Chaka Khan, and Fleetwood Mac, and in  Europe, most notably in recent years by Eurovision winner Conchita Wurst and Belgian star Milow, whose albums were top 5 in most of Europe. (See VIDEOS page.) I've also had many songs placed in TV shows and movies.

My first musical memory is of singing "Baa baa black sheep" into an ancient reel-to-reel tape recorder at the age of 2. I never looked back.

Song writing began at 17, with a slew of lovelorn songs written through college years. Things got more serious when I teamed up with old school friend Julian Marshall to form Marshall Hain. Our song "Dancing In The City" hit the top 5 of most European countries, as well as Australia and S. Africa, and still gets enough radio plays to make a decent dent in the grocery bills. 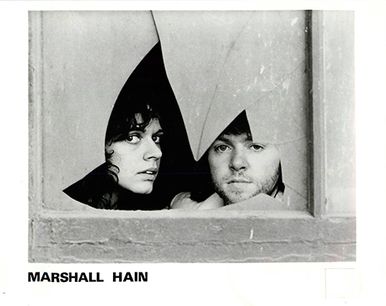 After Julian and I parted ways (we're still best of friends), I wrote and recorded two solo albums, one of which included the Dutch hit "Danny", then moved to New York City where I continued writing songs as well as music for advertising, while gigging at New York clubs like CBGBs, The Bitter End, and the China Club. The last bass player to join my band was a certain Jon Grindstaff. We got married. I stayed in the States. In 2002, we moved out of New York City to Pennsylvania. 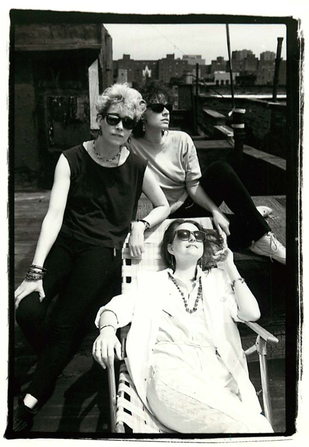 During the New York years I teamed up with two friends to form The Blister Sisters, an a capella trio. For a year or so we sang regularly on the streets to generally favorable response and dollars in our hat. We did have eggs thrown at us once, though.

My third solo album "Cry Freedom" was released in Belgium in the mid-90s on Tempo/EMI. I was also a guest singer on guitarist Joe Taylor's "Oracle" and "Desolation Angels" albums, and Soft Cell producer Mike Thorne’s "Sprawl" and "The Contessa’s Party"albums. 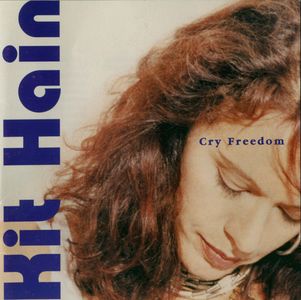 My career for the past 20-30 years has focused on writing songs for other artists, either with or for them, and/or with their producers. For the most recent cuts, scroll down to "THE LATEST" and "THE PAST FEW YEARS". (See also links to videos.) They include Unbreakable, recorded by Conchita Wurst, which came close to being the Austrian entry for the Eurovision Song Contest in 2012. In 2014, Conchita won the contest.

BACK TO THE BEGINNING

The first major artist to record my songs was Roger Daltrey, lead singer of THE WHO. Kiki Dee then recorded Perfect Timing, and Brit star Barbara Dickson recorded Rising Waters (written with Ian Lynn). Since then, I've had the good fortune to write for and with some fabulous artists. In the U.S., they include songs released by Aimee Mann (Til Tuesday), Heart, Cher, Fleetwood Mac, The Osmonds, Judy Collins, Peter Cetera & Chaka Khan, Selena, and The Temptations. In Europe they include cuts with Danish star Caroline Henderson (8 songs written w/Caroline on her #1 album "Metamorphing"), Trintje Oosterhuis (Netherlands), German Idol winners No Angels (Germany), Monrose (Germany), and Marie-Eve Janvier (France). More recent cuts are listed below.

I've also been lucky enough to have songs licensed regularly for TV shows, and the occasional movie. (See separate list below.)

In 2007 and 2008 I was invited to Belgium for a week-long songwriting event called Song City, where I wrote songs with local recording artists including Milow, Stan van Samang and Eva de Roovere. 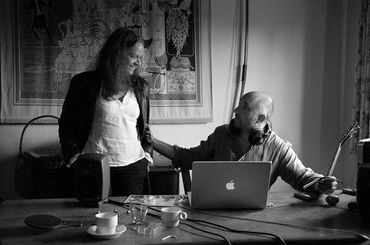 The brain child of publisher Luc Standaert (Cricket Hill Music), Song City was a great success. Both events culminated in a live show to an audience of several thousand, and led to cuts on each artist's albums.

The 2007 show was my first onstage appearance in 10 years. . . Terrifying! Once I started playing, though, nerves vanished, and I loved every minute. For Milow's set, I accompanied him singing Out of my Hands, which we'd written that week. The song's first-ever performance, it was later a single from his #1 album "Milow", and a hit in Germany for him and Marit Larsen. (See VIDEOS page for some of our songs, as well as Stan's hit, Poison.) 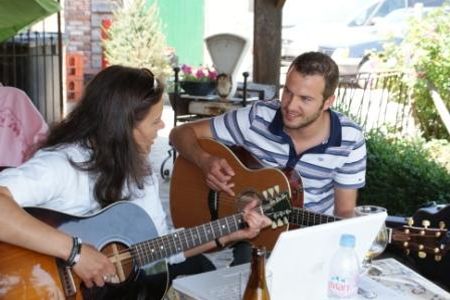 Writing with Stan van Samang for his 2nd album 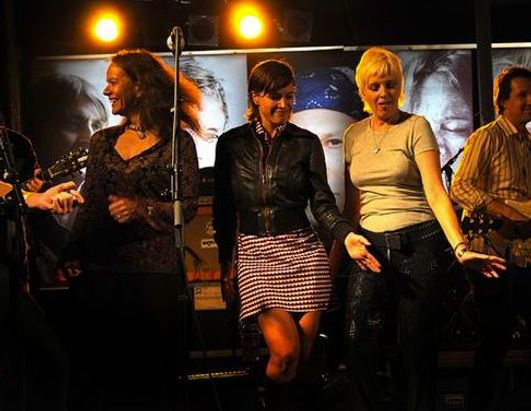 Out of step with Eva de Roovere and Ellen Foley, Song City 2008

On this list, all songs are written with the artist unless otherwise stated. Several songs on this list are also on the VIDEO page.

2012: The Osmonds Break Your Fall, written with Nikki Gregoroff and David Bellocchio. From album “Can’t Get There Without You”. 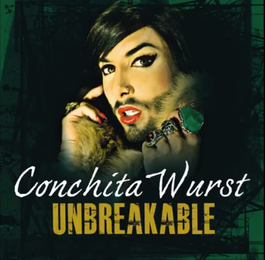 2011: Milow (Homerun/Universal) She Might She Might (single - see also VIDEO page), Building Bridges, Rambo, and Little in the Middle from hit album "North and South"

2009: Milow (Homerun/Universal) Out Of My Hands and The Ride on the live album, "Maybe Next Year".

2009: Milow (Universal) Out Of My Hands (single) and The Ride: 2008's “Coming of Age” album repackaged as "Milow"; top 5 throughout most of Europe. Out of my Hands hit in Germany as duet w/Marit Larsen (See also VIDEO page.)

2008: Milow (Homerun Records, Belgium) Out Of My Hands and The Ride: both singles from the #1 album “Coming of Age”. Album on Belgian charts for over a year. (See also VIDEO page.)

2008 The Hills (MTV series) (singer/co-writer: Ready for Anything)

Other TV shows: Felicity, Sex in the City, All My Children.

I'm now writing novels for teens and pre-teens under my married name, Kit Grindstaff. My debut, THE FLAME IN THE MIST is a dark, magical fantasy, published by Delacorte Press/Random House Children's Books.

The trailer for the book (with music for the first half written and recorded by me, with the vocal talents of my then-6 year old niece and great niece), is on my website, as well as on my YouTube channel, here. 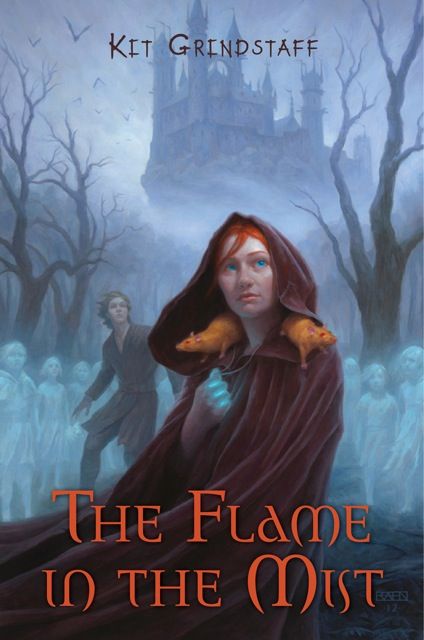 My other passions include sunshine, shamanism, yoga, walking, reading, sushi, chocolate, and puppies.